An occasional look at the West, wild and otherwise, in fiction and nonfiction, comics, moving pictures, radio, music, and in ways yet determined or created. Caveat lector: Irregular postings from The Woodstove Whittlers and Wrangling Association may include a tall tale whose veracity may be difficult to ascertain, but whose sincerity should never be doubted. This blog may go on unexpected hiatus due to natural disasters, stampedes, seasonal roundups, or spontaneous potluck suppers. (Oh, and everything here is copyright Duane Spurlock unless otherwise noted.) 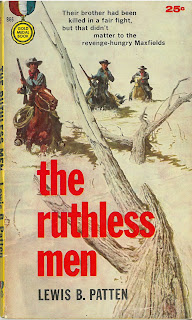 According to Wikipedia, The Ruthless Men was the second of four novels written by Lewis B. Patten published in 1959. All were paperback originals. This and one other of the four were published by Fawcett Gold Medal. The other two were published by Avon Books.

Patten had been publishing novels for seven years by this time—his first published story, according to Robert E. Briney in The Best Western Stories of Lewis B. Patten by Bill Pronzini and Martin H. Greenberg [Southern Illinois University Press: 1987], appeared in the April 1950 issue of Zane Grey’s Western Magazine. According to the “Bibliography of Western Publications,” Ruthless Men was his twenty-first novel for adults (Pronzini and Greenberg)—he’d also written at least three novels for younger readers featuring Gene Autry and Jim Bowie (what we’d call tie-in novels today) for Whitman Books and Big Little Books.

All that preamble is to say, Patten’s apprenticeship was done by 1959. He knew what he was doing as a storyteller of traditional westerns. For the most part, The Ruthless Men demonstrates the truth of that statement. In other ways, it also demonstrates that Patten hadn’t yet achieved mastery in his storytelling efforts. There was still time for that. After all, his last novel wasn’t published until 1980. 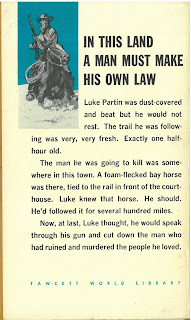 The Ruthless Men focuses on Luke Partin, who opens the novel intending to kill a man he’s tracked for days after he follows his trail from the house of a family who’s been butchered. Years before, the family had nursed Luke back to health after he’d been left for dead by Apaches. For Luke, this vengeance trail is a way to repay a debt and assuage his fury.

After Luke succeeds in his quest, his target’s surviving family members set after him on an enraged vendetta. This sets up a long chase-and-fight narrative that drives Luke to the end of his reserves and lets Patten show a character dealing with deadly situations as he nears the end of his rope.

This narrative landscape allows Patten to demonstrate his skills at showing a hero under stress—something he did very well for years in nearly all his books—as Luke must deal with the ramifications of his vengeful ride.

On the other hand, the story relies on melodrama and pulp-magazine-style schemes and strategies for scenes featuring ambush and escape to support its plot. While Patten’s pacing and characterizations keep a strong grip on the reader’s attention, the pulpy flavor of some of the drama shows that his mastery of the traditional western isn’t quite complete. For instance, some of the subtlety Patten would employ in later novels isn’t quite evident here:

<<
Riding away, Nancy Holcomb glanced up at the foot of the rim and saw Luke watching her. She raised a hand, then dropped it abruptly and turned her face away.
She hated him. He was brutal and savage and had probably lied about the man he had killed and about those who were following him.
And yet, if she hated him, why did she feel such shame at leaving him thus? Why did she feel like weeping all over again, just as she had last night? (p. 39)
>>
This is rather simplistic emotional turmoil. It may form the reality of some folks' perceptions at some level, but Patten drops it on the page in a rather raw form, belying his efforts to describe his characters as having more complicated or mature interior lives. The nuanced emotional and psychological portraits readers have come to expect from Gold Medal's genre novels isn't entirely on display here, but the sort of fast-moving action novel that readers look for—or at least I look for—in Fawcett westerns is certainly evident in The Ruthless Men.

Still, these quibbles shouldn’t stop you from seeking and reading this early-ish novel by a writer who would win three Spur Awards and become a master of the traditional western.

Posted by Duane Spurlock at 4:14 PM